Of the things we at Oceanwire are thankful for, one of the most critical for our future is the quest of some to explore, document and map the oceans’ creatures and its nooks and crannies, trenches and vents, reefs and shoals.

The Census of Marine Life, a 10-year global effort to inventory as much ocean life as possible — or as one researcher characterized it, create “a digital address book of what lives in the oceans” — revealed some 6,000 potentially new marine species and has given us all a chance to see some of what lives beneath the sea’s surface.

For this, we are thankful. 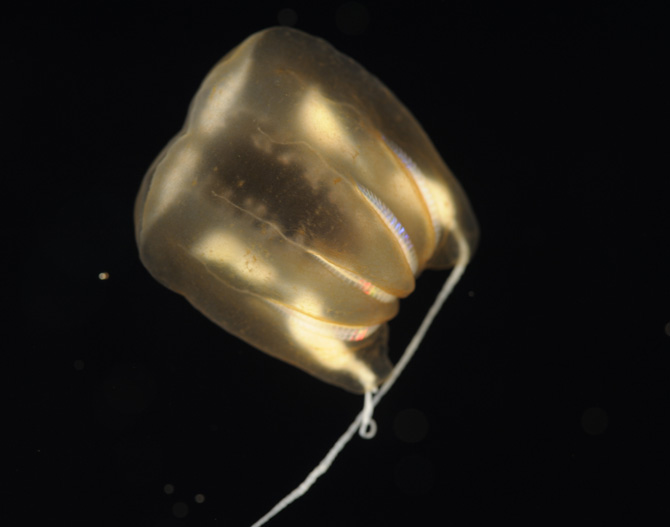 It looks like a molar tooth drenched in gold, or maybe a metallic mylar birthday balloon. But this is a bathypelagic ctenophore, photographed near the Mid-Atlantic Ridge of the Atlantic Ocean. The ‘bathypelagic zone’ is the layer of the ocean about 3,000 – 13,000 feet deep, sometimes called “The Midnight Zone”, because there is no light at these depths.

Ctenophores are known to many as comb jellyfish – they have eight rows of cilia that look like combs, which they use to move through the sea. Researchers say this one anchors to the seafloor with its tentacles.

Researchers collaborating on the Census of Marine Life returned from an expedition to the Mid-Atlantic Ridge, brimming with findings of new creatures, reporting on unexpected abundance of some already-known creatures, and sharing stunning photos (like this one) with the world.

“This expedition has revolutionised our thinking about deep-sea life in the Atlantic Ocean. It shows that we cannot just study what lives around the edges of the ocean and ignore the vast array of animals living on the slopes and valleys in the middle of the Ocean,” said Professor Monty Priede, Director of the University of Aberdeen’s Oceanlab.

The fact that the BP oil leak is gushing a mile underwater has kept the incident from becoming the complete public relations disaster it would be if a fraction of the oil geyser’s output was coming anywhere near lots of shore or humans.

This is divine luck for BP right now.

But it’s the opposite for the wildly diverse and biologically important life in the Gulf of Mexico’s deep waters.

The creatures of the deep sea are not entirely documented nor understood by researchers. Complex, labor-intensive and invaluable expeditions have been regularly trying to find these creatures, document them, and study their wondrous biologies, including bioluminescence and visual polarization. Thousands and thousands of creatures somehow thrive in darkness. Some are so delicate, their bodies disintegrate when scientists try to capture them for study.

The deep sea “is the Earth’s largest continuous ecosystem and largest habitat for life. It is also the least studied,” said researcher Chris German of Woods Hole Oceanographic Institution, co-chair of Biogeography of Deep-Water Chemosynthetic Systems project, part of the global 10-year Census of Marine Life.

It’s difficult to know how the sea life anywhere near the mile-deep oil spigot – or those being soaked in BP’s chemical dispersant (Corexit 9500) – will live through it. And even harder to understand how the damage at those depths could be documented.

It will be the silent, unmarked devastation of the Deepwater Horizon blowout. We’ll probably never know the magnitude of destruction at depth.

Error: Twitter did not respond. Please wait a few minutes and refresh this page.